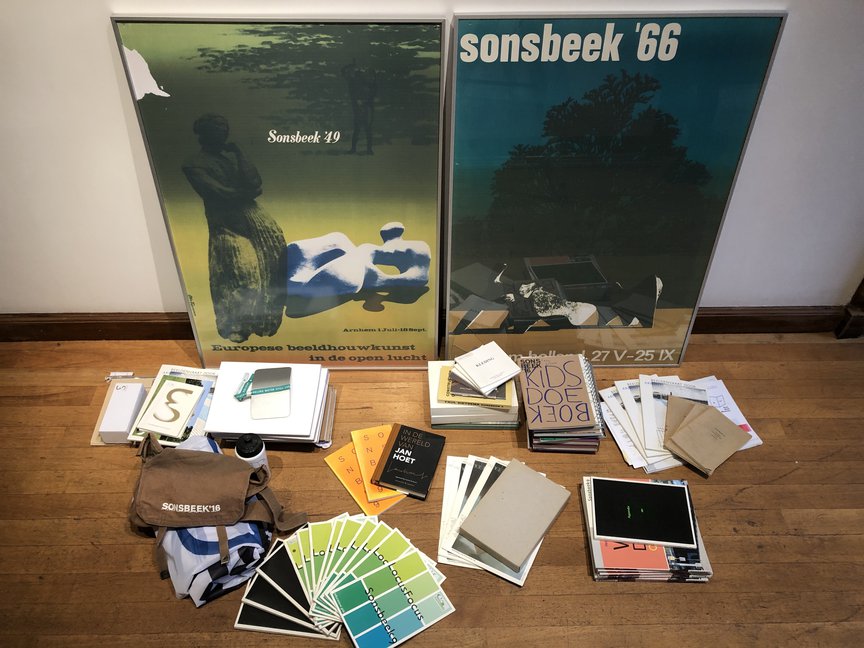 On 14 December 2019 in Rozet and 18 January 2020 in the Kronenburg Library, sonsbeek officially launched the sonsbeek archive. We received beautiful photos, slides, newspaper clippings, t-shirts and works of art. We also spoke with several sonsbeek visitors from the past and recorded these stories.

We received the most generous donation from Jeroen Voskuilen of the Molenplaats. Boxes full of books, newspapers, ego documents of sonsbeek16, posters and even a small statue of the Lazy King (artist Alain Séchaz, sonsbeek2008) have been added to the archive. Jeroen Voskuilen has been working at the Molenplaats since 1999. He has experienced the sonsbeek editions of 2001 (Jan Hoet), 2008 (Anna Tilroe) and 2016 (Ruru) very closely. Over the past 20 years Jeroen has collected his own archive of sonsbeek material. A number of special publications of sonsbeek artists we didn't have ourselves are also in his archive. This allows us to make the archive more complete piece by piece.

Henk Schuiling, guide at sonsbeek2001, made the most remarkable donation. He brought his own work of art made from saved spoons, which were originally part of Michael Ross' artwork Age of Spoons. He found the spoons at the end of the exhibition, left in the woods. Among other things, he brought in t-shirts from sonsbeek 2001 and a number of signs that accompanied the works of art.

Unfortunately, documents, photographs and objects cannot be physically handed in now. But if you have special objects or memories of previous sonsbeek editions, we are still most interested in all your stories! Please mail to archief@sonsbeek.org.